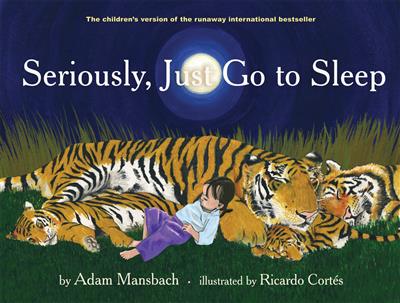 Loading...
The adults-only picture book Go the F**k to Sleep became an international phenomenon. At last here is the version you can safely read to your kids and have them sleeping by the end! It lets kids and parents laugh together about the tricky business of going to sleep.
Save for later

'Clever, funny and cathartic, parents and babysitters alike will love it.'

Adam Mansbach's novels include The End of the Jews, winner of the California Book Award, and the bestselling Angry Black White Boy, a San Francisco Chronicle Best Book of 2005. His fiction and essays have appeared in the New York Times Book Review, the Believer, Granta, the Los Angeles Times and many other publications. He is the 2010-11 New Voices Professor of Fiction at Rutgers University, New Jersey. His daughter, Vivien, is three. adammansbach.com A Ricardo Cortes has illustrated books about marijuana, electricity, the Jamaican bobsled team and Chinese food. His work has been featured in the New York Times, Vanity Fair, Entertainment Weekly, New York Magazine, the Village Voice, the San Francisco Chronicle, and on 'The O'Reilly Factor' and CNN. He lives in Brooklyn, New York, where he is working on a book about the history of Coca-Cola and cocaine. rmcortes.com
Close