Library Browse DIAMONDS DOWN UNDER... 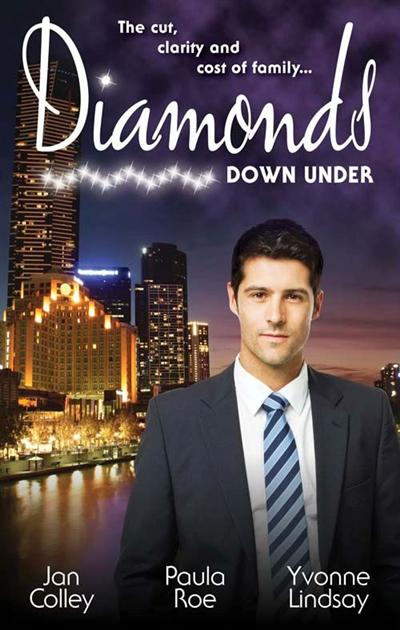 By Jan Colley, By Paula Roe, By Yvonne Lindsay

Loading...
Satin & A Scandalous Affair by Jan Colley What would it take for Danielle Hammond to design a necklace for one of the world's highest-priced diamonds? Gem broker Quinn Everard View more
Save for later

A typical Piscean, award winning USA Today! bestselling author, Yvonne Lindsay, has always preferred the stories in her head to the real world. Which makes sense since she was born in Middle Earth. Married to her blind date sweetheart and with two adult children, she spends her days crafting the stories of her heart and in her spare time she can be found with her nose firmly in someone else's book. Former PA, office manager, theme park hostess, software trainer, aerobics instructor and Wheel of Fortune contestant, Paula Roe is now a Borders Books best seller and one Australia's Desire authors. She lives in Sydney, Australia and when she's not writing, Paula designs websites, judges writing contests, battles a social media addiction, watches way too much TV and reads a lot. And bakes a pretty good carrot cake, too! Jan Colley lives in the South Island of New Zealand with her real-life hero, firefighter Les, and two lovely cats. After years traveling the globe and Jan's eight-year stint as a customs officer, the pair set up a backpacker hostel called Vagabond. Running her own business, she discovered the meaning of the word busy and began reading romance to relax. In 2002, they sold the hostel and Jan decided to take two months and write a book. Two months turned into a year. She did a Kara writing course with Daphne Clair and Robyn Donald, and finaled in the Clendon Award, garnering the Readers Choice. That book, Vagabond Eyes, was ultimately rejected. Two completed manuscripts later, she heard the words she had heard in her head a hundred times: Jan? It's Melissa Jeglinski here. We'd like to buy your book. Trophy Wives was released in December 2005 under the Desire imprint. Jan now works part-time and dedicates the rest to writing and neglecting her family and friends, although she does find time to watch rugby whenever there is a game on. Jan would be tickled pink to hear from readers. You can contact her at vagabond232@yahoo.com.
Close