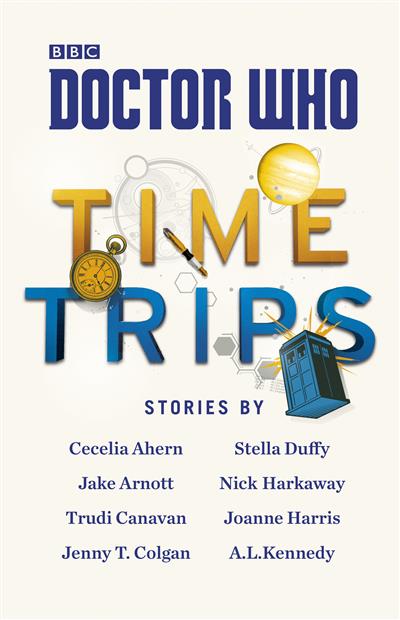 Doctor Who: Time Trips (The Collection)

By Cecelia Ahern, By Jake Arnott, By Trudi Canavan, By Jenny T. Colgan, By Stella Duffy

Loading...
Time Trips is a unique and beautifully illustrated collection of Doctor Who adventures from bestselling and award-winning writers including Joanne Harris, Trudi Canavan, Nick View more
Save for later

Doctor Who: Time Trips (The Collection)
9781448142323
by Cecelia Ahern
by Jake Arnott
by Trudi Canavan
by Jenny T. Colgan
by Stella Duffy
Doctor Who

Cecelia Ahern (Author) Before embarking on her writing career, Cecelia Ahern completed a degree in journalism and media studies. Her first novel, PS, I Love You was one of the biggest-selling debut novels of 2004 and a number one bestseller. Her successive bestselling novels are Where Rainbows End, If You Could See Me Now, A Place Called Here, Thanks for the Memories, The Gift, The Book of Tomorrow, The Time of My Life, One Hundred Names, How to Fall in Love and The Year I Met You and have collectively sold 23 million copies. PS, I Love You became an International box office success, starring Hilary Swank and Gerard Butler, and Where Rainbows End was adapted to Love, Rosie starring Lily Collins and Sam Claflin. Cecelia has also co-created the hit American television comedy series Samantha Who? Jake Arnott (Author) Jake Arnott was born in 1961, and lives in London. His debut novel, The Long Firm, was published in 1999 to huge public and critical acclaim. He Kills Coppers, Truecrime, Johnny Come Home, The Devil's Paintbrush and The House of Rumour have followed to equal acclaim. Both The Long Firm and He Kills Coppers have been made into widely praised TV dramas. Trudi Canavan (Author) Trudi Canavan lives in Melbourne, Australia. She has been making up stories about people and places that don't exist for as long as she can remember. While working as a freelance illustrator and designer she wrote the bestselling Black Magician Trilogy, which was published in 2001-3 and was named an 'Evergreen' by The Bookseller in 2010. The Magician's Apprentice, a prequel to the trilogy, won the Aurealis Award for Best Fantasy Novel in 2009 and the final of the sequel trilogy, The Traitor Queen, reached #1 on the UK Times Hardback bestseller list in 2011. Jenny T Colgan (Author) Jenny T. Colgan has written numerous bestselling novels as Jenny Colgan, which have sold over 2.5 million copies worldwide, been translated into 25 languages, and won both the Melissa Nathan Award and Romantic Novel of the Year 2013. Aged 11, she won a national fan competition to meet the Doctor and was mistaken for a boy by Peter Davison. Stella Duffy (Author) Stella Duffy has written thirteen novels, over fifty short stories, and ten plays. She has twice won Stonewall Writer of the Year and twice won the CWA Short Story Dagger. She adapted her novel State of Happiness for film with Zentropa/Fiesta, HBO have optioned her Theodora novels for a TV mini-series. She is also a theatre-maker; Associate Artist with Improbable, Artistic Director of Shaky Isles Theatre. Stella is the Co-Director of Fun Palaces, the campaign for wider cultural engagement for all. Nick Harkaway (Author) Nick Harkaway was born in Cornwall in 1972. Author of the novels The Gone-Away World, Angelmaker and Tigerman, he lives in London with his wife and two children. Joanne Harris (Author) Joanne Harris's Whitbread-shortlisted Chocolat was made into an Oscar-nominated film starring Juliette Binoche and Johnny Depp. She is the author of many other bestselling novels, including Lollipop Shoes and Peaches for Monsieur le Cure, both also featuring Vianne Rocher, as is her new novel The Strawberry Thief. She has also written acclaimed novels in such diverse genres as fantasy based on Norse myth (Runemarks, Runelight, The Gospel of Loki), and the Malbry cycle of dark psychological thrillers (Gentlemen & Players, Blueeyedboy, and Different Class). Born in Barnsley, of an English father and a French mother, she spent fifteen years as a teacher before (somewhat reluctantly) becoming a full-time writer. In 2013, she was awarded an MBE. She lives in Yorkshire, plays bass and flute in a band first formed when she was sixteen, and works in a shed in her garden. A.L. Kennedy (Author) A. L. Kennedy has twice been selected as one of Granta's Best of Young British Novelists and has won a host of other awards - including the Costa Book of the Year for her novel Day. She lives in Essex.
Close